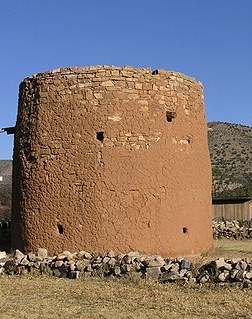 I dreamed a famous billionaire real estate developer appeared before the Santa Fe historical styles committee to seek approval of his proposed Torreón de Billy the Kid Hotel and Casino in an old neighborhood near the Roundhouse.

The New York developer, who touted Hispanic influences on his Florida resort, wore a Billy the Kid-like hat. Tufts of orange hair stuck out beneath the narrow brim. Stenciled on the crown were the words, “Make the Barrio de Analco Great Again.”

In my dream, he was leasing the property along the south side of the Santa River from the state of New Mexico, which recently had acquired it a complicated swap involving an Indian tribe, former apple growers, one of Santa Fe’s most famous families and a beloved hamburger joint.

The Legislature was meeting in Santa Fe and the state budget was in trouble. The developer and supporters argued that a cut of the money paid to the state by the hotel-casino would help replace declining oil and gas revenues.

Also, a small oilfield might be developed on the river bank property, the developer mentioned briefly, near the end of his presentation.

“This would be huge,” he said, citing the potential financial reward to Santa Fe and the state.

The round, 10-story hotel-casino tower would be in keeping with other architecture in the neighborhood, including the state Capitol, the developer told the committee. It would feature cracked plaster, leaky, flat roofs and small, barred windows.

It would be modeled on a famous 19th century torreón in New Mexico’s Lincoln County, possibly once visited by Billy the Kid, although compliant with “Recent Santa Fe Style.”

When it was disclosed that the stucco on a large wall around the torreón —  to conceal the parking lot and the possible oilfield — would be synthetic, a committee member suggested this could be seen as a slap in the face of the original Tlaxcalan people of the barrio, who had plastered their buildings with mud.

“I have discussed this with my many Tlaxcalan friends,” the developer responded.

“I have a great relationship with the Tlaxcalan people,” he said.