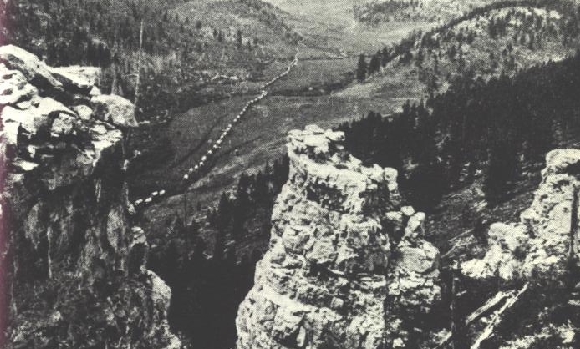 “… It seems likely that Custer lived long enough to try to repeat his success at the Washita by capturing the village’s women and children.” Nathaniel Philbrick, “The Last Stand.”

“If he could cross the river to the north and secure hostages, he’d have the key to victory.” Nathaniel Philbrick, “The Last Stand.”

The Custer strategy of hostage-taking in U.S. effort to round up or exterminate northern Plains Indians in the 19th century sounds to me a lot like the Trump administration policy of separating children from parents to combat illegal immigration 142 years later.

Hostage-taking has sometimes been defended as a relatively benign measure to achieve peaceful ends, but then as now it involves victimizing non-combatants. In the Custer case, reunification of families presumably would have happened faster than in the Trump era, as long as killing wasn’t involved.  But all this is especially painful to me when it includes young children — even a 1-year-old, as recently reported by Astrid Galvan of The Associated Press, although she did not call it hostage-taking.

I am emerging from a month of re-reading a bunch of Custer stuff with a couple of renewed thoughts.

One is about the inglorious strategy of capturing children as hostages. In Custer’s case, with both women and children, it is a theme repeatedly noted by Philbrick.

The other is that, as a country, we have been late to accept what really was afoot in July 2, 1874, when Custer set out to invade the Black Hills, and on June 25, 1876, when 8,000 pissed off Native Americans (National Park Service estimate) were camped in the valley of the Little Bighorn.

A lot of history has missed the real story, focusing on Custer and the details of his demise instead of why in the first place such a big population of Native Americans had gathered in that southeastern corner of Montana territory.

The Native Americans were fearful, rejecting the tyranny and corruption of reservation life, seeking buffalo and antelope for food. And bullies will never learn: It should come as no surprise why Natives unleashed their fury on Crook at the Battle of the Rosebud and then Custer in the subsequent Battle of Little Bighorn. Step aside for a moment from reports of Indian atrocities on white people and consider the Treaty of Fort Laramie of 1868, abrogated by Custer in 1874 as a pawn of U.S. policy, paving the way for 15,000 gold-crazed American miners to flood into territory undeniably ceded to Native peoples.

“… By the time Custer was upon them they had nothing to lose from an all-out fight,” Larry McMurtry wrote of the Battle of the Little Bighorn in his 2012 book, “Custer.”

Dee Brown pointed us in the right direction of understanding with his “Bury My Heart at Wounded Knee” in 1970. Helen Hunt Jackson was on the case with her “A Century of Dishonor” in 1881, five years after the Battle of the Little Bighorn. Maybe there were others; my reading is not complete. But it’s amazing that the Native American view of events of the late 1800s did not seem to broaden in the popular American consciousness until Brown’s book in the late 1900s.

My favorite Custer book is the amazingly researched and entertainingly written “Son of the Morning Star” by Evan S. Connell.

Connell said this about Custer in a 1985 interview with Nancy Faber of People magazine:

I think the revisionists are unfair in regarding Custer as a villain today. He was a professional soldier within the social structure of that era. They claim he treated Indians brutally, and he did lead the expedition in 1874 that discovered gold in the sacred Black Hills of the Sioux. That probably was the chief factor contributing to the confrontation at Little Bighorn. If the Indians weren’t being forced off their land, they wouldn’t want have been so hostile. But the Black Hills expedition wasn’t Custer’s idea.

But that again is about Custer, not the larger historical question about why the Native Americans were camped in that southern Montana river valley on on June 25, 1876, not wanting him or the columns of Crook, Terry and Gibbon to come but sensing the end of their culture was near.

I have lost interest in whether a case of hardtack dropped from a pack mule’s back — whether Custer was unwise, Reno drunk or Benteen hostile — was the most fateful factor leading to the death of Custer and 267 men under his command.

I am more interested these days in the U.S. policy, which in the 1800s was to displace Native Americans and take control of the West, by whatever means necessary.

As a side note on American greed and corruption, I am also considering why the Native Americans had so many repeating rifles, which history reminds us the 7th Cavalry did not.